A decade ago — 10 lousy years ago — the cellphone camera was invented. 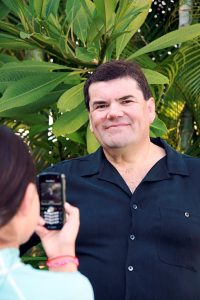 This is almost impossible to comprehend. The cellphone camera is now almost as much a part of daily life as toothpaste. On an increasingly regular basis, the technology alters world events, as when that Iraqi guard used his cellphone cam to record the hanging of Saddam Hussein. Imagine if cell-cams were around when Marie Antoinette went to the guillotine.

Motorola CEO Ed Zander told me that his company, which makes cellphone cams, sells more cameras than any camera maker. Gartner Group says that 460 million cellphones with cameras were sold in 2006. By 2010, the number sold per year will pass 1 billion. These things are moving the way McDonald’s moves hamburgers.

Star Trek always gets kudos for getting the future right, but those beam-me-up-Scotty communicators were pitifully camera-less.

The whole cellphone cam movement started, oddly enough, with one of the great, colorful characters from the flowering of personal computing in the 1980s: Philippe Kahn.

Back in those days, he was a large, contentious, French-accented jazz flautist who started software company Borland. After turning Borland into one of the major early successes in PCs, Kahn was pushed out in 1995 in a dispute about the company’s direction. He then launched cellphone software company Starfish, which played a role in his invention of the cellphone camera in 1997.

A number of companies were messing around with the idea. Putting a camera in a cellphone was becoming nearly as obvious as realizing butter should go on toast. But to make the concept work, somebody had to come up with the knife, so to speak. Kahn gets credit for doing that for the cell-cam.

Kahn’s story of the origin of the cell-cam is kind of cute. It started when his wife, Sonia Lee, roared at him while spending 18 hours in labor. “I’d gone to the Lamaze classes,” Kahn, now 54, tells me. “And the second time I said, ‘Breathe!’ Sonia said, ‘Shut up!’ So I said, ‘OK, I’ll sit at this desk and find something to do.’ ”

He had come to the hospital outfitted, as usual, with his laptop, cellphone and digital camera. He thought about how clumsy it was to have to take a digital photo, download it to his laptop, post it to a website, then e-mail his friends to tell them where to look — all of which was pretty new at the time. He wanted to snap a picture, hit a button and have it automatically load to the Web.

As his wife’s labor went on, Kahn started fiddling with his hardware and writing code to glue it together. “I had time to make a couple trips to RadioShack to get soldering wire,” Kahn says. “I just stayed in the room and made that thing work.”

By the time he was holding his newborn daughter, Kahn could use his jury-rigged contraption to take a digital photo and wirelessly post it for his friends and family.

Motorola was in the process of buying Starfish, and Kahn says he first showed his invention to his new boss. But Motorola was just getting a new CEO (Chris Galvin) and embarking on one of the most ill-fated projects in global corporate history (the Iridium satellite phone system). Motorola passed on the cellphone camera.

“Motorola was in turmoil at the time,” Kahn explains.

Kahn formed a new company, LightSurf, to build and market PictureMail — a back-end system that would let a cellphone take a photo and send it somewhere. The first version came out in Japan in 1999, helping spur the Japanese to make the earliest cell-cams. Motorola and Nokia ended up being late to the cell-cam game.

Cellphone cams evolved quickly. Most these days can take video as well as still photos. Kahn says he had some idea, even in 1997, that cell-cams would make a big impression.

“It wasn’t far from the Rodney King tapes,” he says, referring to the citizen-shot video of King being beaten by Los Angeles police officers. “It was clear that a little bit of videotaping had a massive impact on American culture. If you put that in the hands of a lot of people, and there are no barriers to sharing, it’s going to have a huge impact.”

For the first time, hundreds of millions of people are carrying an image recording device all the time. It means somebody in a comedy club audience can see Michael Richards blow his wig and immediately capture it and post it on YouTube. The ubiquitous cell-cam seems particularly handy when some actress shows up having forgotten her underwear.

The always-there devices mean we get first-hand images of disasters, terrorist attacks and crimes. In his state-of-the-city address this month, New York Mayor Michael Bloomberg unveiled a program that will let citizens snap cell-cam photos of crimes and send them to 911. Hopefully, not many people will make use of PhotoShop software to etch a rival’s license plate number on a photo of an illegally parked car.

Cell-cam photos are the new autograph. See a celebrity, snap a picture and post it. The gadgets are recording innumerable tiny events that used to go into the ether — first baby steps, first kisses, first sales commissions. My 13-year-old son’s cellphone is filled with photos of fish he and his friends have caught in a nearby creek, most of them the size of a sausage link.

Kahn, who is working on a still-secret new company called Fullpower, altered society with his soldered-together contrivance. And the scary thing is, the infiltration of cell-cams is only beginning.