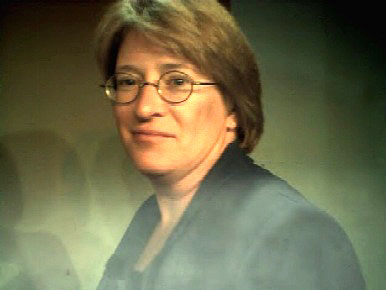 The above photo of Chris Shipley, Executive Producer of DEMO Conferences, was taken by Philippe Kahn at DEMOmobile 2000, as LightSurf Technologies revealed its instant wireless digital photography technology. This was the first Instant Wireless ephoto taken in North America, powered by LightSurf Technologies.

Kahn appeared on stage holding a next generation, ultra-portable wireless phone attached to the world’s smallest digital camera, designed by LightSurf. Kahn then snapped a digital photo and transmitted the image wirelessly to a web site in a matter of seconds. Operating without cables or wires, the tightly integrated camera and phone captured, previewed and sent the image to the Internet.

LightSurf’s technology can be integrated into an array of wireless mobile devices and wireline products, including cell phones, PDAs, PCs and even automobiles. The company’s back-end image management system consists of a massively scaleable

LightSurf is developing, deploying and managing visual communications solutions for a broad range of customers and applications, including messaging, voice annotation, streaming video and audio, and other forms of media. The company’s technology is compatible with today’s wireless networks and scalable to keep pace with the increases in speed and bandwidth of future wireless communications systems.

Recently, the company formed collaborative partnerships with Kodak (NYSE: EK) and Motorola (NYSE: MOT) to create and deliver wireless digital photography solutions for the mass market. The Kodak Picture Center Online is an example of LightSurf’s back-end imaging infrastructure that is currently in commercial use managing millions of digital images for consumers across the United States.

“LightSurf is creating the technology, infrastructure, and services to drive wireless visual communications into the mainstream,” said Philippe Kahn. “We have proven that today’s networks and wireless infrastructure, coupled with our technology, can rapidly capture and send high-quality images anywhere in the world.”

The market for wireless visual communications is expected to grow rapidly, as demand for mobile net access devices and photographic applications on the Internet expand. Photo sharing is already the most requested service on the Internet today, according to studies by AOL/Roper Starch and Morgan Stanley. InfoTrends, a leading market research group, forecasts that at least one billion digital images will be uploaded to online photo communities this year. This number will increase considerably due to the growth in film digitization and the use of digital cameras. On the hardware side, the Yankee Group predicts that 60 million net access cell phones will be in service by 2005.

“LightSurf’s wireless digital photography technology is exciting because it is here now, on today’s networks, not just a promise of things to come,” said Chris Shipley, executive producer of DEMOmobile. “LightSurf is leading the visual communications arena. We expect to see many exciting applications and services in the coming year from LightSurf and their partners, including Motorola and Kodak.”

LightSurf is the third company started by Kahn. He previously founded Starfish Software, a leading supplier of wireless infrastucture and synchronization solutions that was successfully acquired by Motorola in 1998. Kahn retained his position as CEO of Starfish, which is now a thriving independent subsidiary of Motorola. Prior to Starfish, Kahn founded Borland International, a leading provider of world-class software development tools.

Kahn, who was named by Byte Magazine as one of the Top 20 Most Important People in the history of the computer industry, is featured in the October 2000 issue of Wired discussing LightSurf and his plans for revolutionizing wireless visual communications.