The gadget that perverts, vigilantes, and celebrity stalkers can all agree on. 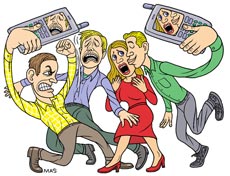 Ten years ago, Philippe Kahn was walking around a hospital with a cell phone and a digital camera. His dadly mission: to share pictures of his newborn baby girl. With an assist from Radio Shack, he linked the two devices together and e-mailed photos to family and friends around the world. The day marked a twin birth of sorts: the cell phone camera and daughter Sophie.

Kahn regards his invention with paternal pride: “I built it to document the birth of my daughter. For us, it has always been a positive thing.” So he was taken aback recently when, with the Saddam-hanging video circling the globe, an interviewer compared him to the inventor of the Kalashnikov. First there was Prince Harry’s Nazi costume, then the shaming of Kate Moss, then the Michael Richards racist explosion, but, for some, Saddam’s hanging marks the low point for Kahn’s creation. A camera on a phone has only aided the perverted, the nosy, the violent, and the bored.

That’s not exactly fair, but it’s not exactly wrong, either. As Kahn told Wired in 2000: “With this kind of device, you’re going to see the best and the worst of things.” The best would include photo caller-ID, amateur sports highlights, and the quick citizen snaps taken in the wake of the London bombings. Yet, despite the fun and occasional worthiness, the cell phone camera has launched a thousand jackasses. One representative example: Sportscaster Sean Salisbury was suspended by ESPN last month, reportedly for showing female co-workers cell phone photos of his “equipment.”

When video technology was added to phones (with little fanfare), the madness went up a notch. English youths devised a pleasant game called “happy slapping,” which involves assaulting random strangers while your mates record the whole thing. The happy slapping craze spread throughout Europe last year, leading to outraged op-eds and calls to ban cell phones from schools. While the phenomenon is marked by more than a touch of media hysteria, you can certainly find disturbing videos on YouTube. (The French, naturally, replied with “Streetkissing.”) There have also been news reports of graphic videos showing beatings and accidents, such as an unfortunate boy in Birmingham, United Kingdom, who impaled himself on his bicycle. Teenagers have employed cell phone cameras for old-fashioned humiliation, too: The parking lot fight is now captured on video and shared. To be an adult is to be grateful to have escaped the digital hazing of high school.

In glorious retrospect, it seems like a terrifically bad idea to give the world a spy camera that looks and functions like a cell phone. Peeping Toms quickly realized the potential for upskirt pics and shower-room souvenirs. Chicago tried to block cell phones from gyms, and a California legislator has proposed a law requiring the cell phone to make a shutter snapping sound or flash a light when a picture is taken. We have trained ourselves to be wary when a cell phone is pointed at us, but the device’s relative inconspicuousness still creates problems. In Saudi Arabia, women have been taking pictures of other women unveiled at weddings and e-mailing them to matchmakers, a practice that has caused uproar in a culture in which any sort of image can be cause for loss of honor.

The cell phone camera, constant companion, has also been championed as an anti-crime device. There have been several Rodney King moments, with bystanders pulling out their cameras to record sketchy police activity. One woman took a shot of a flasher on a New York subway, a photo that ended up on the cover of the New York Post the next day. There is also a mini-boom in sites to catch people who park like idiots, stare too long, and mistreat your kids. Think of this as the positive side of living in 1984.

The more difficult question, the one that lurks outside the media glare, is how the cell phone camera is altering our private lives. In the perceptive book Kodak and the Lens of Nostalgia, Nancy Martha West writes how Kodak, with the introduction of the personal camera, taught Americans to both conceive of their lives in terms of fondly remembered events and to edit out unpleasant memories. In Victorian America, for example, arranging to take a photo of a dead relative was not uncommon—a part of the grieving process. Under the reign of Kodak and its advertising, we became family historians of happiness. Now that digital cameras have taken over, the old photo album is giving way to the personal Flickr page, bringing with it a different set of assumptions of what to present (a whole lot more photos, for starters) and whom to share it with.

The ubiquity of the cell phone camera means that every moment in our lives is photographable. One consequence of this is an altered perception of the gravity of our day-to-day routines. We are now more aware of ourselves as observers of “history.” When a van catches fire in front of our house, we and our neighbors are now out on the lawn recording. We e-mail this to our friends, who testify to the enormity of the event, and then we all await the next sensation. This impulse can be positive, but it also fuels the increasingly destructive American habit of oversharing. The snapshot speaks with a small voice: I’m alive and I saw this. The cell phone camera picture or video is a shout from the rooftop: Check out this crazy thing that happened to me.

Picture sharing has also made us more aggressive in situations in which we feel insecure, such as in the presence of celebrities. Susan Sontag described the essentially hostile nature of taking pictures as a form of “soft” murder. In the age of cell phones, this scalp-hunting sensibility is achieving full flower. Let’s say you’re in Asbury Park and you see Bruce Springsteen with his kids. The old impulse would have been to ask the Boss if you could take your picture with him. The new impulse is to snap the shot with a cell phone camera and sell it to a site likeScoopt. No wonder famous people don’t want to hang out with us.

So, before we move on to the next racist comedian or cocaine-snorting supermodel, let’s put the Saddam video in context. It is a weird echo of the Zapruder film, another piece of amateur footage that caught the death of a leader. The differences are stark, of course. Zapruder captured Kennedy while standing openly in the Dallas sunlight. The official who videoed Saddam did so furtively, pointing his camera to the ground at times. But they both testify to the power of first-person witnessing, and how a digital copy of that witnessing can upend neat narratives and certainties. We’ll see the best of things, we’ll see the worst of things, we’ll see everything.

The Browser would like to thank the excellent Web site picturephoning.com.